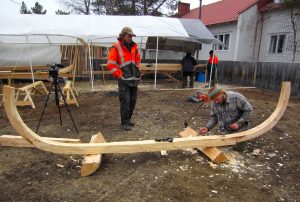 Sámi Museum Siida and the Sámi Education Institute began a collaborative project in Fall 2014, which made possible the construction of a traditional Skolt Sámi root-sewn boat. We also participated in this compelling project.

In May and June of 2015, a boat building site emerged in the center of Čeʹvetjäuʹrr, Sevettijärvi. As part of a course of the Sámi Education Institute, participants built their own wooden fishing boats from local pine, or helped construct a root-sewn boat for display at the Čeʹvetjäuʹrr Heritage House and for future use during cultural events. The boat was based on a model from Petsamo from the early 20th century, and made by sewing planks together with roots instead of metal nails. Building the boat was a community effort of remembering, as many things had to be pieced together from archives, experientially, and through stories. While ethnographic texts and archives by T.I. Itkonen and Samuli Paulaharju roughly outlined the making of root-sewn boats, there were many details of technique and construction, as well as tacit knowledge, that had to be figured out through the process of making itself. The instructor, Mika Alava, and staff from Siida Sámi Museum travelled to the National Museum in Helsinki to look at boat models illuminating details of construction. Most importantly, they hoped that by making the boat in Čeʹvetjäuʹrr, they could consult oral histories and the embodied knowledge of root boat making, either through the sharing of memories, or the embodied skills of those who had learned to work wood from their fathers and grandfathers. Finally, the project was meant to be a community effort that would bring people together through the act of building. 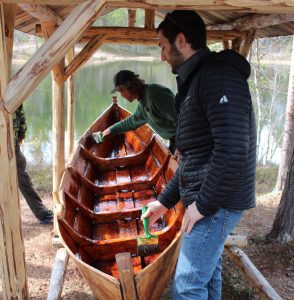 Arttu: Skill, will, and interested people around were needed, as well as a lot of volunteer work from Mika and others, so that we could experience and see the production of the root boat. People who still have the skills and desire should help carry out a similar project, because it is too rare that something like this is produced.

Through these activities it was demonstrated how things could be made beautiful, functional, and ecologically sustainable through past understandings and tools. Things were made as authentically as possible because with hand tools one can understand an older language. Machines do not have the same capabilities. The project in question indicated that the preservation of handicraft cultural knowledge is of great value. We had to dig deep to get an understanding of the root boat, and to make mistakes to get the boat put together. There were only very few people to ask for advise. Men’s handicraft culture is especially threatened, and therefore it is important to uncover this knowledge.

Villagers and travellers came to chat about old times, to observe the making with interest, and to recount how they had seen earlier generations making boats. Thus these kind of joint efforts brought the village together. It was great to see how interested people were in the boat, which also reflects its importance.

The construction of boats from natural materials was the lifeblood of the Skolt Sámi. Through historical pressures these skills were forgotten. The return of traditional skills to lived experience can make them again the material of cultural life. Old knowledge and skills anchor Skolt Sámi culture in the unpredictability of the modern world. 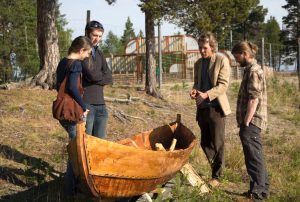 Natalia: Mika Alava, Arttu Niemenmaa, Matti Semenoff, Heimo Semenoff, Arto Leivo, as well as Matt and I, worked together to build the boat, while other villagers would regularly visit the boat site to observe the progression of work, provide advice, and share their memories of boat making. Matti Semenoff planned to make a similar boat for himself. I was not too skilful with the axe and chisel, and therefore mostly made wooden nails, helped with the root sewing, and collected seeuʹter (F. rahkasammalet) to make seams watertight. Matt, however, was able to help work the large boards, drawing on his experience during summers in upstate New York when he and his dad would maintain the family home through wood working and masonry. During the project, we documented the root boat construction to provide footage for a film to be shown at the Heritage House in Čeʹvetjäuʹrr, and for educational materials to facilitate future reconstructions.

Matt and Natalia: Based on this project, we have published an article in the Journal of Social Archaeology titled “Archaeological ethnography of an indigenous movement: Revitalization and production in a Skolt Sámi community.” Link to the article: Skolt_Foundation_Magnani-2
A summary of the article appears in Skolt Sámi, translated by Anna Lumikivi. The article examines the significance of cultural revitalization in the past and present, and among indigenous communities around the world, focusing on the making of the root boat, as well as tools for the processing of inner pine bark, pie’cc.

It suggests that the renewed making of craft is important for cultural revitalization, and serves as a way for indigenous peoples to establish connection to land and strengthen community. In this way, study of cultural revitalization today facilitates connection to indigenous resistance in the past. Furthermore, it shows that making things evokes collective and embodied memory of ancestral ways of relating to materials and environments.