This is an Instagram introduction for Lokin Spark, a 28-year-old man from Hong Kong. He is a professional dancer and performer with a passion for hip-hop dance. Ok, Hong Kong and hip hop. So what does this guy have to do with the Skolt Sámi Cultural Foundation’s new blog?

Well, it’s quite a story.

Mr Hiphop in Hong Kong had a desire for new experiences in life, so he decided to head off to Europe. He applied for a working visa in France and arrived in Paris in mid-August. Lokin Spark wanted to do new things in Europe he didn’t dare to do at home. He was thirsty for new experiences, new friends, he wanted to travel, and see the world.

This all came to me when I contacted Lokin Spark with Messenger. Moments before making the contact I was watching a Instagram video, where a guy was dancing on the Sevettijärvi bridge. I ‘d received a link from Riitta, the owner of Sevetti Bar.

Just the previous week I had been drinking tea with Riitta and Kari in their unopen bar, which was still under construction. They spoke about a young Asian man who had been staying at the apartment next to the bar.

The story astonished me!

Laughing gently, the couple described this guy who was from Hong Kong. They saw him in the dark, swinging a flashlight repeatedly back and forth and to both sides. He had never experienced anything like this; it was completely quiet, and pitch-dark. Lokin came from a city of millions of people that never sleeps and where the lights never go out. He was terrified.

How did a guy from Hong Kong find his way to Sevettijärvi? He was chasing the northern lights.

Riitta and Kari informed me that he had flown from Helsinki to Ivalo, and continued by bus to Sevettijärvi. However, he didn’t expect the village would be so small. The street lights were not kept on – there wasn’t even a grocery store at that time. (Now there is, there is a minishop at the bar Riitta and Kari opened up some time ago.)

Fortunately, the guy met some locals. The bar owners picked him up and took him to Näätämö, 30 km away to the next village to do some shopping. They took him around and showed him the beautiful wilderness of the surrounding fells. Clearly, the young traveller enjoyed Sevettijärvi hospitality with Riitta and Kari. He had a sauna for the first time in his life, and it was a memorable experience for him. But he didn’t see the northern lights.

Lokin Spark spent three days at Sevettijärvi. One day Riitta looked across the bay and saw the Asian swinging on the wooden bridge.

I was back in Helsinki already when my phone beeped with a message. Riitta wrote:
See the Instagram update from the user @lokin_spark:

Check this out!！The video was taken in Sevettijärvi, Finland. The weather was cloudy, with fog and cold, but the place is still a paradise! #Finland #Sevettijärvi #lapland #hiphop #freestyle #improv #movement #chilling #dance #dancer #from #HongKong #troyboi #afterhours

I did. A guy with a cap is sitting and dancing at the end of the wooden bridge. He gets up and continues dancing. I realize I’m looking at familiar landscape. At the right across the lake there is Sevettijärvi schoolyard, and the bridge is the same one I’ve walked across many times. Antinsilta – Antti’s bridge. The landscape is so beautiful it forces you to stop, and takes your breath away. No wonder Mr. Hiphop chose that place for his dance.

I send the link to social media right away.
However, the story is bothering me because there are gaps in it.
A few days later I find the hiphop dude on Facebook and send him a message. Soon we feel we know each other, because we both know the bar couple. I suggest a small interview and he agrees immediately. He has travelled via Ivalo to Rovaniemi, from there to Helsinki and St. Petersburg, continued to Estonia, and now he was heading along the Baltic to France. He would have time to answer my questions on a night bus. 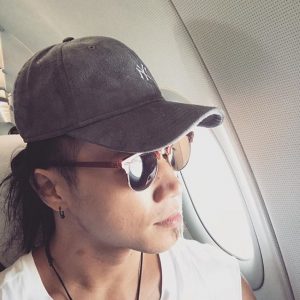 I want to know how he came to Finland, and especially to Sevettijärvi.

–My best friend lives in Helsinki. I was in Finland for a whole month, mainly in Helsinki and surroundings. My dream was to see the northern lights, so I started to explore the Internet. I found Sevettijärvi, and decided to experience something different. I know that many people visit Ivalo and Inari, but they don’t go that far away.

– When I got to Sevettijärvi, it was so, so quiet. I felt that I was the only person on Earth! I’ve never experienced anything like that. It was like I was living in the middle of the forest. I come from a city that hassles and dazzles around the clock. I was really scared, especially the first night.

– But then I met locals, and I also met Riitta and Kari. They were wonderful, they gave me a lot of encourage. Sevettijärvi is a really a beautiful place – I would say it’s a paradise. A visit to Sevettijärvi is one of the best decisions I’ve made in my life! Now I’m no longer afraid of loneliness and darkness – rather, I love them both!

This all sounds sweet. And you danced on Antti’s bridge, Antinsilta, why?

– Dance is my life. I danced on the bridge because the view was incredible, and I wanted to honor it through hip hop. Dancing in different environments is a great way to save great moments.

Great! I watched your video many times, and there is a great feeling to it.

This story will certainly be read in Sevettijärvi. Do you have greetings to the villagers?

–Sevettijärvi is a great place to go! I would love to come back to Finland just because of Sevettijärvi and the people there!

Then welcome! How did you like Finland in general?

–There is so much to see in Finland, especially in Lapland. Finland is a pretty expensive country, though. It would be nice to come back to see your summer  – or your winter. I have heard that your seasons are quite different from each other. Finland is a great place to visit. It is worthwhile experiencing at least once in your life.

–Now I’m in Paris. And I’ll start a new episode of my life here.

I thank you very much for the interview! 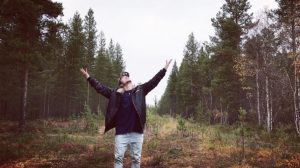 The gaps are fulfilled. Mr Hiphop exudes great spirit. He’s a sincere and open-minded traveller and he has a genuine appreciation for his visit up to the north.

We hope to have Lokin Spark in Sevettijärvi again. A dancer in the glow of northern lights would make an amazing hip hop video.

Writer is Secretary General in Skolt Sámi Cultural Foundation. She lives in Helsinki and works in Sevettijärvi.